After missing last weeks race then having to take a few more days off the bike due to illness I was itching to get back after it. Finally things cleared up and I was back on the bike Wednesday with a few solid workouts before race day on Sunday.

The awesome 60 degree weather leading into the weekend was long gone as it rained all day Saturday followed by a cold front that brought 40 degree overcast to all us cross racers on Sunday. The rain softened up Jefferson Barracks treating us all to some fun in the mud. And by the 3pm  "A race" the turf had been successfully greased up by the previous races.

The mud was perfect. Not sloppy splatter stuff like what they saw up North in Iowa, but more a thick stick to your bike kind of mud with only a few tricky slippery spots.


The course was straight for the most part that included a long up hill in-to the wind section that was killer, a few u turns here and there and the hecklers/cheering section.

I don't really know how many were there but they made it seem like 100. They had a great spot to see riders try to ride what was a down hill into a u-turn back up a slippery slope section. I rode it twice but kept loosing traction so I ran it the rest of the race which was quicker.

Here they are to greet the many who crossed their path lap after lap. 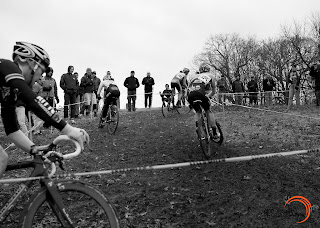 The best part was being cheered on to the name of  "JY Jelly" which cracked me up each time I passed.

The race had a good quality field that I'm sure will be confirmed when results are posted to USA cycling by how low the points go. All the fast guys in the area were there with the exception of Miller and Schottler.

I had a horrid start as Kurt who was in front of me did not hear the official say go, he sat there a few seconds after the whistle. Finally we moved forward then after a friendly "dammit Kurt" I quickly worked my way up to the front about 5th wheel before the high speed run up that was ride-able with speed.
However when you have 20+ racers coming into a momentum section and one of them looses momentum or does not judge the speed right, well it's like a train derailment; it backs up worse than the toilets at Froze Toes in Columbia. Yep, there was a crash.

Fortunately I made through unscathed along with Josh, Greg, Casey, Chris H and a few others.

The long head wind up hill section quickly separated riders, before I knew it it was down to Josh, Chris H and I leading the way. Soon after it was just Josh and I. So now I'm in unfamiliar territory racing Josh one on one. I figured I would be aggressive and keep the pressure on with a few attacks.  I'd pull away here and there but he would close the gap back.

After a full lap on my wheel Josh pulls around with an attack just after the gravel section, I match it, he throws down another on the small uphill next to the pit, I match it but now I'm near my limit. After the down hill he attacked again up the hill in to the wind; I snap and off he goes. Crap!

I recover a bit then began the task of trying  to close down the gap with the remaining laps, came close with two laps to go but did not have enough, Josh took the win and I crossed in 2nd. Chris H held on for third and after that I'm not sure.

That race ranks up there as one of the most enjoyable races I've done.

Next up Boss Cross 4 on Saturday and then MO State on Sunday in KC. See you there.

All photos by Dan Singer
Posted by Jeff Yielding at 12:27 PM