Imagine you're on the highway for a one hour drive. Get in the right lane...... now veer over just at tad and ride the rumble strip for then next 60 min. Toss in some hills and you have a taste of what Bubba CX 3 was like. It was a bumpy hilly affair. 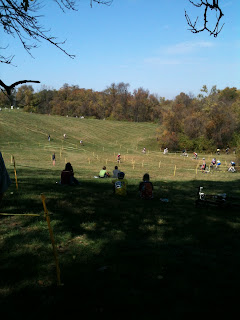 Two laps into the A race sitting in 2nd place the chain quick release tabs worked them selves loose from all the banging and aggressive abuse it was taking from the bumps.  I get out of the way of those behind me then begin a long run to the pit. Not a bad run really, the hills were nice as I was able hop on the bike a few times and coast until the next uphill.

I get to the pit, grab my pit bike then look around to see where the leaders are. They are not that far from the pit entrance; Josh is out in front, close behind are Dan, Mike and Anthony in the chase group. I figured I would wait then  slot my self back in where I was when I lost my chain, even though I was a lap down I was still racing like I was on the same lap. I did not drive all this way for two laps and no workout. Too bad there is not a free lap rule in CX :)

In the end Dan rode away, caught Josh and took the win. Josh held on for 2nd. Took me a while but I shook off Mike and Anthony seemed to fade near the end. I took virtual 3rd or you could say imaginary 3rd, but not really as I was a lap down.

Not sure how many started but I think it's a good guess that nearly half did not finish from a mix of how tough the course was and mechanical issues.

Chain is back on the bike and ready to rock this coming Sunday at Boss Cross 3 where I try to get back some points in the 40+ jersey contest.
Posted by Jeff Yielding at 1:44 PM