Took the day off work for the big Gateway Cross Cup in St Louis last night. Everything was set up super nice, course was great and all was in place for an awesome event.

Team 360 was there and adopted me for the day  letting me keep my bike and other gear under their tent. These guys are super friendly and have a passion for cross.

20 of us 40+ guys barreled down the paved start line into a left hand sweeper that started with gravel then transitioned to grass. I thought the gravel was going to be a dicey section but we all slowed enough to get through OK.


A good group of us pulled away early on forming  the lead pack which included Sam Moore, Brendon Jenks, Tom Price, Stephen Songer and Andy Lucas. As the 5 lap 40 min  race motored on  it came down to Tom, Sam and I on the final lap. We hit the last turn onto the pavement toward the finish line Tom, Sam then I. The three of us went into an all out sprint to the line, I overtook Sam and started to close the gap on Tom but ran out of runway, Tom took the win by less than a bike length, me 2nd followed by Sam.  Tom is 50 so that gave me the overall win in the 40+ group.

That was a really fun race having such a big group stick together like and the sprint was off the hook fun.


I had about 3 hours before my next race, Mens Open at 6:40. Cool thing about the start time is that we would get some racing under the lights.I hung out trying to stay off my feet for the most part and enjoyed the company of fellow racers like JJ and Ira who are always upbeat and jazzed about cross.

Staging for the Men Open race came quick and to the line we went. Again I was on the front row which I was thankful for, this was a big race with 65 guys and that first turn could easally turn into a crash and more road rash. 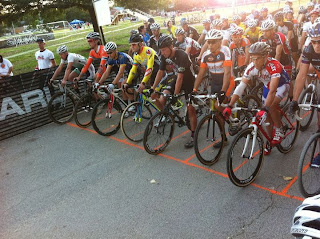 I got a great clip in and took the hole shot which allowed me to dictate the pace into the first turn. After the gravel turn I kept on the gas trying to string things out then see who would join me.

This 8 lap 60 min race went by fast. There were more on site now watching and I could hear "Go Yielding" several times each lap. Super movtivatiional when you've got folks out there rooting you on.

After a few laps things started taking shape with Taylor Carrington, Andrew Coe and Mark Savery pulling away creating the top three and I believe Craig Etheridge stuck in the middle followed by me Chris Harre, Brett Heuring and Matt Tillinghast forming a 4 man chase group. I did not have the legs to push the pace at all and was feeling good that I was able to hang on.  So that was my goal, push hard to hold the wheel infront of me and try to not let go. Surprise of the night was Casey Saunders who bridged up to us, attacked and kept going! Nice.

One lap to go we dropped Matt, Brett pushed the pace to pull clear of  Chris, and I lost the wheel of Chris crossing the line in 8th place. That was a tough race full of big efforts against some strong dudes.

Well done to all you guys in both races who made this one heck of a race day, this is what cross is all about!

Posted by Jeff Yielding at 4:23 PM