Solo ride in the rain 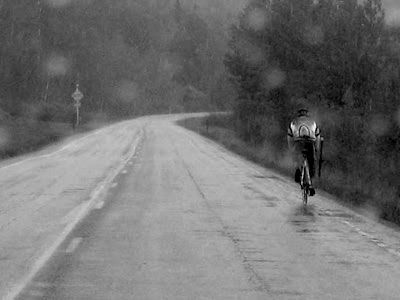 This weekend was wet, It rained all day Saturday and most of Sunday, and on top of that we did not get much past 50 degrees.

Saturday was no big deal as I don't ride on Saturdays anyway. Rhetts run was a bust on Sunday for me due to the wetness of trails, did not feel like racing in the mud and I was looking for a high end effort which I don't get in conditions like that.

So I mapped out a 75 mile route and was pumped to push the pace on this solo venture. All was going normal until mile 26 when it stared to mist then rain. It was a slow rain, nothing to hard that would cause me to call for a pick up, but enough to get my feet, hands and just about everything else soaking wet.

The rain continued for the remainder of the ride. I got some "what the hell is this guy doing out here" looks from a few cars and the folks at the gas station where I filled up with water.

The only bad part was the temps being near 50 and a stiff wind made for cold hands. So cold near the end I could barley squeez my water bottle to get the water out.

In the end I finished the ride strong keeping speed and watts moving upward for just under 4 hours. Banked several HTFU points for that one for sure.