What looked to be yet another wash out for MTB racing turned out to be one of the best days of the week. The forecast for the week and weekend was bleak but the race venue dodged several showers/storms, even the night before. Some say it was due to the control race promoters had over the arch and some Jedi mind power; I believe they must have this power as the trail could not have been better.

Saturday I checked the radar several times during the night, all still looked good and I began to think this thing was really going to happen. Sunday AM all good, game on.

I arrived early enough to take my time getting ready and time to get in a full lap before we started racing. Once I hit the trail I knew I had a shot of doing well, this is my kind of trail. I like a trail that focuses on fitness more so than a technical rocky type trail. Much like a cross race this trail was fast, flowy with lots of variety. Awesome trail!

Race started at noon with a 200 yard run to our bikes. I would say 150 riders, 40 or more in the 3 hour solo field all starting the run at the same time.

Run was good, on the bike with about 10 or so in front of me including Chris Ploch, Tim Kakouris, and Jay Srothman who were also in the 3 hour event. 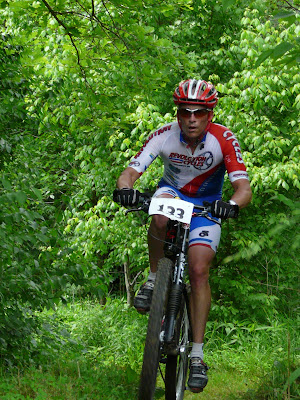 Did not know at the time but I was in 4th place starting the first lap. I could see a group about 15 seconds ahead of me as we entered the woods that looked to be Jay, Tim, Sam Moore (6 hour racer) and a few others.

Lap two I was alone for most of the lap with the exception of seeing Tim and Sam from time to time. I think they were about 20 seconds up. Near the end of the lap Sam had fallen off the pace with Tim.
Lap 2: 41 min 198 MP watts.

As I started lap 3 I was told I was in third place and could see Tim again down the trail as we were now in a wide open field with good line of site. Fully motivated knowing where I stood in the race I put the hammer down to close the gap a bit on Tim. Back in the trees my goal was to keep a good pace and clean lines.

About half way into the lap I caught Tim and just stayed there. The plan to was play defense now and just sit on his wheel for the rest of the lap to see how things played out. As we approached the end of this lap I took the time to eat and drink really well before starting the 4th lap. I lost his wheel doing this as he got at least a 10 second gap on me.
Lap 3: 42 min 190NP watts

Starting lap 4 as we crossed the wooden bridge I caught back up to Tim then attacked all the way down the open open field trail. I had a good gap as I entred the woods, from there to the end I focused on consistent power and clean lines.
Lap 4: 43.5 min with 183 NP watts.

Still under the 3 hour mark I could do one more lap as long as I finished that lap under 3 hours and 30 min for the entire race, if not the lap would not count. I was sitting at 2 hours and 45 min, I would have to do a 45 min or less lap for that lap to count.

Only problem was I played my 4th lap as it was going to me my, so I waited for Tim to enter the finish area to see what he would do. If he was going out again I would follow, if not I would not, we would take 2nd and 3rd. He said he was done, that was it, I took 2nd and he took 3rd with Chris Ploch up the trail doing a 5th lap for 1st.

Foggy brain from racing I guess, I did not think of other riders behind Tim and I. A few minutes later Jay entered the finish area and went out for a 5th lap attempting to beat the 3hour 30 min cut off. If he finished under that he would beat both Tim and I.

Jay put in a good 5th lap but missed the cut off by 1 min. That was close.

Podium was Chris, Me and Tim, Jay ended up 4th. 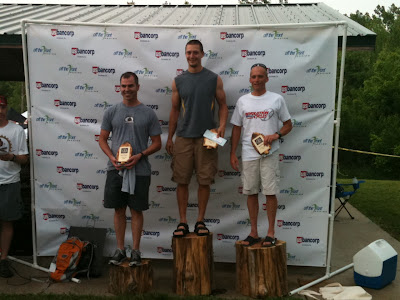 Most MTB races you are all alone with very little interaction with your competitors, other times you get to interact with your competition. Having Tim to chase and then later work to stay away from elevated the race experience to one of the best races I've been a part of. Then you throw in a well organized professional event, well it does just not get any better.

I took home some cool stuff for my effort. 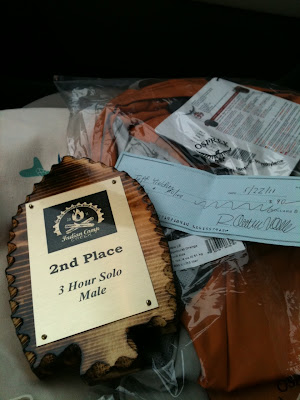 As I drove home storms started to pop up, the 6 hours racers did get wet and they had to cut it short I hear by 30 min or so. 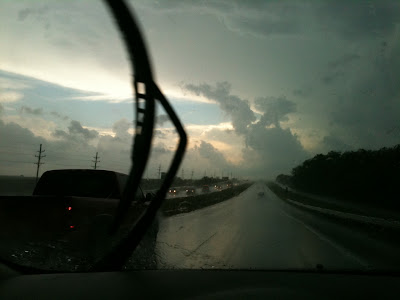 Today I get to analize the power data, that's part of the fun too. 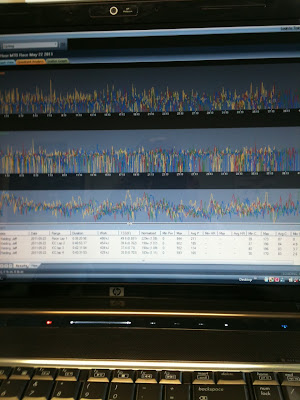 Posted by Jeff Yielding at 9:26 AM