Good solid field of Masters seem to be the norm in the KC area, with that in mind I made the 40+ State Race a priority race looking for nothing less than the jersey. So here we are, Championship Saturday on a cold windy day in Kansas City, MO. The course was the same as this years Boss Cross 1 with a few minor changes.
I made it to the first turn 3rd wheel behind Stu and David Hejduk. After a few turns I moved around Stu to chase David who was quickly working to separate himself from the field. He kept a gap on me for the next few laps that was manageable as we separated ourselves from the rest of the race. Then I started to loose a few seconds here and there and it became evident that David was stronger than I this day growing his gap to 35 sec. The rest of the race I kept an eye on my six keeping a nice cushion just in case then finally crossed the line 2nd overall.
David is from KS so I was the first MO resident to cross the line taking home the Jersey and gold medal. 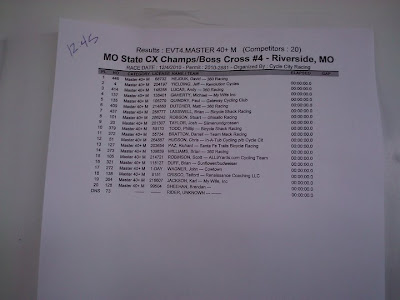 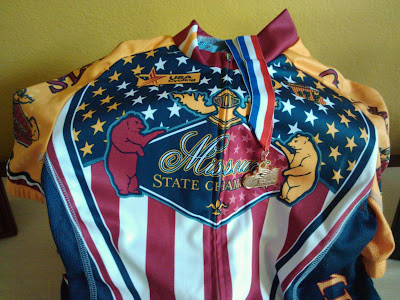 Two hours later I lined up for the Mens Open. About two laps of that race went well then my legs did not have enough to hold on. I stayed in the race and crossed the line 6th out of 9. 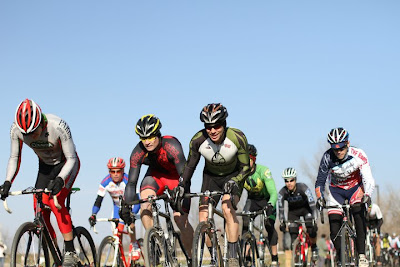 I don't think I'll do the two races in one day thing again this late in the season and on a cold day. Next year my focus will be on the Men's open race at State. In the end I'm pleased with the weekend, goal was the jersey and that's what I got.
This Sunday is Washington CX. This one I promote with help from the crew in Washington.

Posted by Jeff Yielding at 1:29 PM