3 week peak plan before State (by the numbers)

Some folks are numbers people and some are not, I am a numbers person. The power tap is a numbers persons dream and has been the best cycling tool I've ever used as I keep getting more out of it the more I learn.

Last year I had a coach that basically helped me understand how to train with power, this year I went on my own for the most part using what was provided to me last year and mixed in new stuff that I researched.

With Cross Season about to come to a close in a few weeks its fun to look back at the PMC chart which shows form, fitness and fatigue results. You can clearly see in the chart below a peak in fitness right before cross season, it took a shark drop during a designed one week rest period, then slowly drops over the course of the cross season. 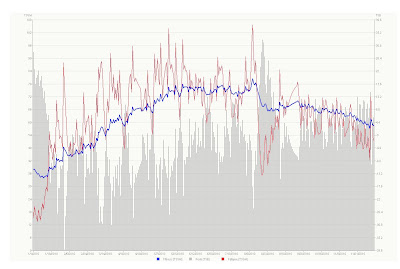 Key event for 2010 was the MO St CX Championship. I put a plan together to peak over a 3 week period with a focus on getting the form number as high as I could without loosing much fitness coupled with alot of rest.

For the races before this three week stretch things would look about like this on race day.
Form (Blue Line) around 9
Fitness between (Gray bars) 65 and 55 sloping downward each week
Fatigue between (Red Line) 45 and 55

The plan worked, I felt great at all three of these races and of course met my goal this past Saturday. 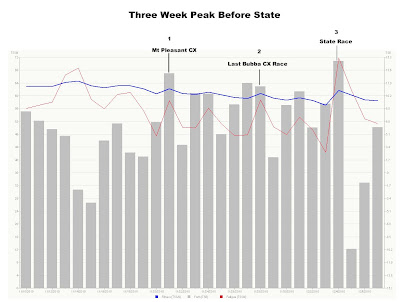 I can definitely feel a correlation to what the numbers read and how I feel on race day. This tool is an excellent way to predict how I strong I will be on race day and helps balance everthing.

Late in the season I realized I could change the date on my computer then plug in the workouts I would do, essentially planning the future to see what these numbers would be on race day. This became an awesome technique that allowed me to plan the workouts better and change them as needed.

I'll keep looking over the numbers which will result in changes for next season. I know for sure I would like to peak the fitneess to around 85 or 90 next year.

This stuff is what makes cycling so much fun!
Posted by Jeff Yielding at 8:07 AM