Sunday I opted for the Hellbender 70 mile road race over the mud fest at Rhetts Run.

I was again on the cross bike but that did not make that much of a difference despite the single 42 chain ring on the front/ 12x27 rear. Only risk is if I get gaped for some reason, it's hard to catch back on. Skinny tires this time too.

First lap was mellow as we moved along at a steady pace under what was still a dry sky. We hit the one big hill, most made it to the top with the group and it stayed that was as we started lap 2.

It was hard to keep track of how many of us were left until we hit the hill again. After 3 min of climbing the damage was done with 9 of us cresting the top for the final time and away went toward the finish with about 10 miles to go.

With 2 miles to go three Gateway guys, Alan, Andy and Doug were up front, I was right there with them as Alan takes off. For some reason I did not mark him and no one else did either. He got a gap and it stuck. Mark and I started to give chase but it was to late and we could not bring him back, so finally we gave up and settled in for a field sprint.

Legs were a bit toasty at this point, my sprint was not much of sprint but more of a hard dig. I crossed the line 4th in my age group and 7th overall.

That effort ended what was a sizable training load for the week bringing the season training load to 76.8 and posted a season high 3 min peak average (372) yesterday during the hill climb.

One more week of training load building and that will most likely be the peak for the season. 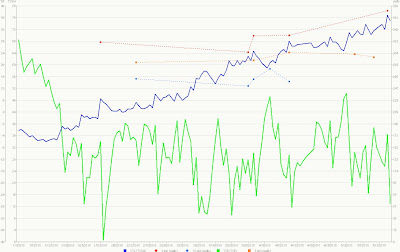 Up next, a dry warm day on the MTB Sunday for 4 hours.
Posted by Jeff Yielding at 5:33 AM