New route this year was a good one, nice to start and finish in Rolla vs. having to drive the extra miles to Newberg which as no cell coverage, that was always a pain. Overall the guys and gals that put on this year Hellbender did a nice job.

My goal today was to get KOM points, hopefully 2 or 3, that would put me in 2nd or 3rd overall and then try for  a few points at the finish to keep that spot.

As with all races you really never can predicts what will happen. As it goes 4 slipped off the front. Dogfish, Gateway, VeloForce and one other that I don't recall which team he was from. This left little motivation for anyone in the pack to chase them down. VeloForce was represented yesterday but not Saturday, early on they were pulling back other attempts to break away, but now with one guy up the road that came to an end. Gateway had Andy in the break with Allen in the pack sitting 2nd overall, they were not going to help and Dogfish had one guy in the chase who would now sit on.

I was stuck between a rock and a hard place. I needed the KOM points but they were quickly slipping away to the break. I could put in a big effort to chase them down, but surly I would have been met with a counter attack and I would have burned a match before the KOM. I stayed with the chase group taking my chances for points at the end.

Jose did a nice move off the chase group to bridge up. He put in a monster effort and just about reached them. Bad luck with prevail as he took a wrong turn.

After the KOM hill Tracy would attempt to get away a couple times only to be marked and brought back. I tried one time to get away, the pack would have none of those shenanigans, pulled back. So it came down to a finish line sprint.

4 man break away, plus a big shark guy and Chris Hudson who slipped off the front only left 4 places for points in the end. Tracy was one point back and surely he would out sprint me which he did. He got one point which put us in a tie for 5th. But thanks to my better placing on Saturday I won the tie breaker taking home 5th overall, 15th in the road race. 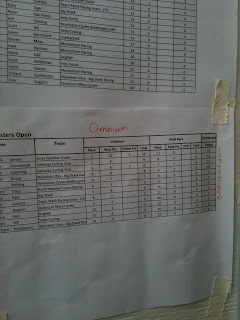 97 days til cross starts!
Posted by Jeff Yielding at 5:56 AM