The day finally arrived for over 100 like minded gravel grinders to attempt what would be a test of fitness and mental toughness.

Sunday I felt good with the intention of completing all 110 miles Cedar Cross offered. I was fresh and ready to go. 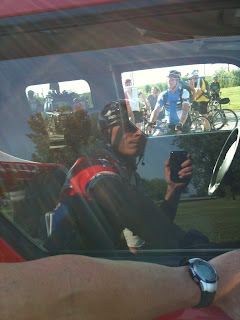 Game plan rules for the day:

The race quickly formed a 12 man lead group that lasted for several  hours. Josh Johnson and Dan Miller did the lion share of the work pulling us along as they set the pace.  We completed the first section of single track only loosing one from out group, local Hermann rider Dennis Baumstrak who joined me for this event. 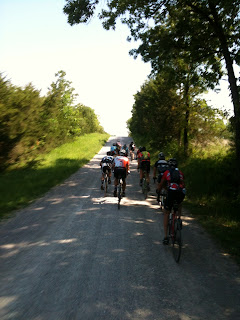 At mile 40 I started to feel the result of not following game plan rule #1.  I really never wanted to go over 170 avg watts for the day, early on it was 190 for over an hour.

Result I fell off the pack as we went over the rollers. Anthony Dust and another rider fell off too as they were just 10 to 15 seconds a head of me for the next few miles.

The bag drop was now less then a half mile up the road. I figured a re-group with Anthony and this rider would occur there and we could then ride together for awhile. Well I took a wrong turn and went a half mile down a hill the wrong way. That just sucked!

Made my way back to the bag drop, filled up with water, ate a bit and headed out again. By then Anthony and the other rider were long gone. As I left 3 Red Wheelers entered the bag drop zone.  Here I did not follow game plan rule #2. Should have waited and grouped up with them, but I went on solo.

I finished up the last single track section which was just nasty. Muddy and  torn up by horse traffic, I was glad that was done.

Now I'm 56 miles in, no more shade and mentally I was starting to check out, here is where following rule #2 would  have been helpful.

The thoughts of knowing I would not make the full 110 miles become a reality. I was at mile 63, there  I made the call to end it and call for extraction, AKA Dawndi. When she met up with me I was 73 miles in but no longer on course.

During the ride I told Dennis Baumstark to follow rule 1 and 2, he did so and finished the full 110 miles! They are good game plan rules, you just have to be smart enough to follow them, I am not :)

Big thanks to Bob Jenkins for making this event happen, hope he does it again next year, I want another shot at this.

That event ended 12 week of base training. 135 total hours, same as last year. 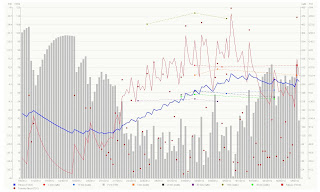 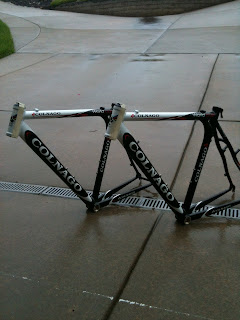