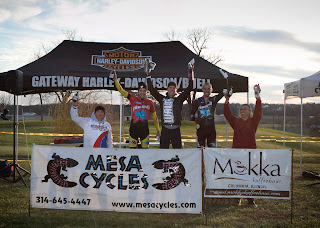 Mark French and his crew in Columbia IL did a nice job hosting a late cross race post State. These late season races are tough to get folks out to race as many have ended their season looking to candy and cookies as Christmas vacations approach.

For others who are still working toward late season goals such as Nationals and Worlds that is not the case, we keep pressing on looking for races between now and early to mid January. Yesterdays race was just OK for me ending up 5th. I did not have the legs I had last weekend feeling flat with a lack of sustained power. I ran my power-tap hoping to glean some good info, which I did, but would have been better to analyze numbers with good legs.

This week I'll continue to train hard then take 3 days off the bike over Christmas followed by Cross of Cold year in KC Saturday Dec 31st.  After that I'll have done all I can as I begin to tapper for Masters Worlds.

Photos by Dan Singer are here