Another Bubba CX series is in the books ending at Spanish Lake this time. I've always like this place both for MTB and CX races. This year the course design had us going in the opposite direction from prior years and the unique use of the park resulted in the best Spanish Lake course I've raced on.

Race started off fast with Dan in the lead. I had a poor clip so I was 5th wheel into the first turn but made my way up to 2nd wheel before heading down the hill. 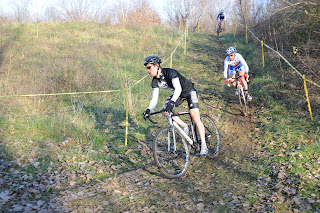 Going into lap two it was Dan and I  with Josh chasing not far behind followed by a chase group of 4 or 5. The pace on the frist few laps was quick which allowed us to get a sizable gap on the chase group.

As we were about to finish lap 3 Josh attacked on the pavement and that was all she wrote; he dropped us both. Dan did a better job of holding on to the attack and almost held on. The rest of the race was Josh out in front growing his lead followed by Dan loosing ground to Josh and I was loosing ground to Josh and Dan. It was a lonly race for the three of us but we held on for 1st, 2nd and 3rd.

Behind us a good race was being contested for 4th place. Dwayne battle it out with Kurt and Chris taking home 4th.

So if you read my posts on facebook you know that I made a small change to how the end of the season will play out. It came down to a decision between Nationals or Masters Worlds. With the two races over back to back weekends the logistics of trying to travel to both started to set in. Realistically for me trying to to both was not looking like a good idea for several reason.

I landed on Masters Worlds. I picked this one due to weather potential will be better, I raced the course back in November and I'm now familiar with Louisville and the place we will stay.

Finally, on my way home Sunday night a deer came out of the darkness on my left. I hit the gas trying to avoid it. I heard a small thud near the rear of the car. Being that it was not loud and no other noises followed I decided to wait until I arrived in Hermann to check for damage. I gave the car a scan and not seeing any issues, then I looked to the bikes. Front wheel of one bike was dislodged from the rack, that was the noise I heard. Check the wheel and it was bent and cracked. :(  Stinks but glad it was just a wheel and not the car.