Jose and I spent the good portion of the weekend over in Rolla for the Hellbender Points Race . Saturday crit followed by a Sunday road race. (Masters Open)

Saturday was good but a stretched out chain caused a skipping every time I would stand on the pedals. I had to stay seated for the entire race or risk falling off the bike. Managed 10th which was good enough for 1 point.

Sunday was a 70 mile road race. Strategy was to stay conservative and go for the KOM hill points. That goal was accomplished as I earned max points on both laps for a total of 6.

2nd time up the KOM hill I had to dig deep to hold off Robo. That I guess was too much for the quads as a few miles later as 8 of us were zooming down the road for the final 10 miles I had some major cramps. So much so I had to pull over, stop and stretch them out before I could keep going. Spent about 2 min working them out then I was good to go trying to catch Andy Gibbs who was about 1 min up the road. Never caught him but finished strong for 11th.

Total points for the weekend, 8. Tied with Jose but he finished ahead of me so he wins the tie breaker. Jose ended up 7th overall I came in 8th.

One of the things about cycling that I think is so great is you are rewarded with hard work and focus. Looking at this years race power numbers vs last year that hard work is paying off.

Power from 0 to 9 min was much better. The rest of the race shows at or just below what I did last year. That is more from how the race was raced then max efforts. The 9 min and under highlights the hill climbing and shorter accelerations. 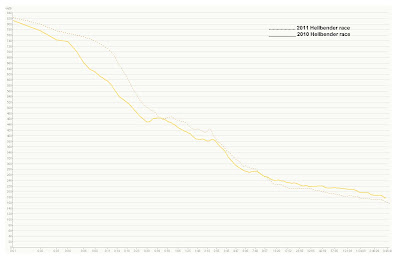 That's it for the road races this year. Next up 3 hour MTB race on Sunday if things dry out, Dirt crits in July and then....... just 81 days away, you guessed it, cross starts!
Posted by Jeff Yielding at 5:05 AM