Dawndi and I had a nice weekend trip down south to Sainte Gen and Cape Girardeau this year for some antique shopping and the State Road Race.

We started in Sainte Gen to check out some of the course, looked around a bit and had some lunch. It was French Heritage Days in Sainte Gen so some activities where going on like this walk to the church with people dressed like they did way back when. 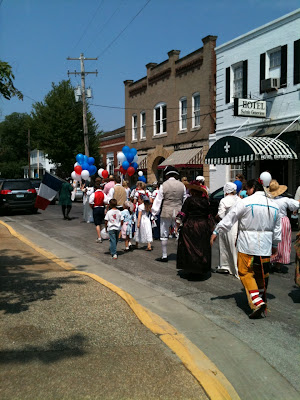 After a stop in St. Mary for the antique shop we headed to Cape Girardeau for more shopping and lounging. Cape had lots of shops by the riverfront to keep us busy until it was time to check in to our B and B. 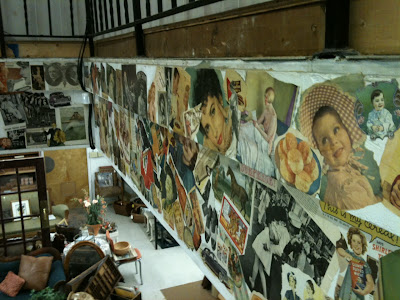 We stayed at this really nice Victorian Inn; Bellevue Bed and Breakfast just a few blocks from the river front shops.

Brian the inn keeper gave us a tour and some history of the place. 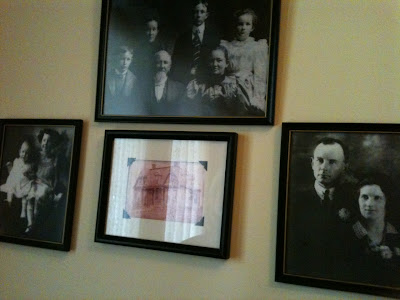 We had a nice time back near the river front that night with a trip to a lounge for a few drinks then filled up on pasta for dinner.

Breakfast was not til 9am at the B&B, so Linda the other innkeeper, wife of Brian, made us a super nice granola, yogurt, fruit, bread and OJ spread to go. Hit the spot and was perfect fuel for the race.

Sunday was race day, 40+ was the event for me. Todd, the promoter, had mustangs for lead cars, how sweet is that? 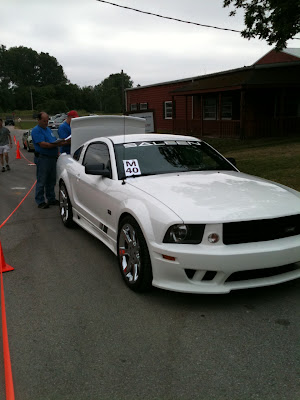 Goal for the day: Win King of the Mountain then see what happens at the end. 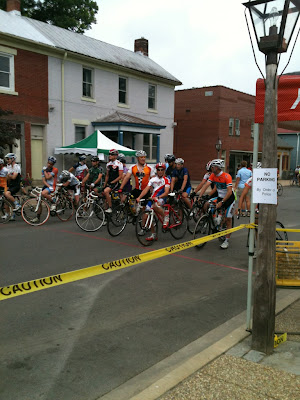 Robert Browkaw and Chris Hudson did allot of work on the first lap, those two and few others spent the majority of their time at the front dictating the pace and watching to breaks. I would go up the from time to time to do my share and did help pull back a two man break.


The KOM was about 28 miles into the race. All together at a casual pace we're getting ready for the KOM hill. I made my way up to about 3rd wheel as we started 1K climb to the KOM line.

Soon I was in front and decided I would hit it hard with 500M to go. It worked, only Jose stayed with me as we powered up the hill. Jose miscalculated the KOM line a bit sprinting early. I crossed the line 1st, Jose 2nd and I'm sure who it was that took third.

Next up was the feedzone. With all the drama from last week in IL and talk on the boards about attacking in the feedzone Jose and I made sure we would watch for each other just in case we needed to work together to chase or whatever.

It was a non event, all were gentleman as we slowly made our way through, and there was even a group agreement that we would stop for a pee break.

2nd lap now underway it was not too far down the road when Tracy Smith zooms around right side the group on a solo attack I believe just before or after the St. Mary turn. The group did little to respond until we saw he was growing his lead. I moved to the front to help chase along with Rob Landes, Robert Browkaw, Chris Hudson and a few others. We were not making much of a dent. I've never raced with Tracy before so I had no idea what a power horse he is. He was putting down an impressive effort easily averaging over 22mph on his own.

A few more organized efforts occurred but nothing that really made a difference. Jose races for Mesa now so his contribution would have been useful, but he was just along for the ride now with his teammate up the road. I we neared the KOM again I gave up helping anymore as I needed a bit of recovery.


Chris Harre broke off just before we crossed HWY 55 which is a mile or two before the KOMl. As we approached the long straight before the KOMl we could see Tracy starting his climb about 30 to 40 seconds up the road then Chris in the middle about 15 seconds up.

The way it stood Tracy would take first place KOM points this lap, Chris may make it to the top and grab 2nd place points so I knew if I wanted to win the KOM needed 3rd as KOM points were only three deep.

I took the lead again up the hill but waited until we were 100m out before giving it all. Just missed catching Chris at the top by a few seconds but did secure 3rd place points which was enough to win the KOM competition. We did not catch Tracy.

The hill sorted out the final group of the day; Rob Landes, Robert Browkaw, Chris Harre, Jose Burgarin, Paul Quindry and I grouped up after the hill and made one final effort to catch Tracy.

On the final small climb a mile or so down the road Jose had a chain issue and had to stop, he was out. The remaining five of us continued our chase leaving no chance for others behind to catch us while at the same time we attempted to catch Tracy again.

As we made our way into town it was clear we would not catch Tracy. We had one more turn to navigate before the final stretch to the finish. The final turn is a tricky one, it's less than 90 degrees so you can't really take it at full speed. Robert warned the group about the turn as he washed out there last year and I pre rode this corner as it looked hairy. Rob Landes did not believe him I guess and plowed his way into the turn, you guessed it, he washed out and took Paul with him. Chris made it through OK, I made it OK but did have a chain skip on me for some reason which took away some momentum.

My legs were done, I really did not have much to muster as I tried to put the power down to secure what could have been 2nd or 3rd overall. Rob and Robert managed to recover from wreck and power their way to the finish overtaking me and Chris. Paul was not so lucky.

Tracy held on for the win, followed by Rob, Robert, Chris; I crossed the line in 5th.

With the age group break out that gave me 3rd in the 40-44 group. Things certainly would have been different if Jose had not had his chain issue and the wreck had not occurred in the final turn. Regardless, goal accomplished with the KOM and I took home the cool jersey seen in the photo below.

Congrats to all that raced in 40+ group, it was truly a super competitive race that kept us all on alert from start to finish.

Todd and his crew did an excellent job. Everything was on time, registration was a breeze, organization was top notch and the results were up so fast followed by podium presentation I almost missed getting back in time from cleaning up.


KOM podium
Me, Tracy and Chris 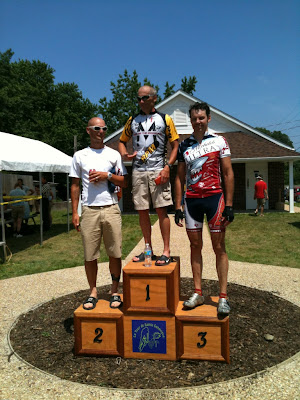 Fun with numbers:
Maximum Mean Graph
Yellow line is when I did this race in 2009.
Dotted line was yesterday. 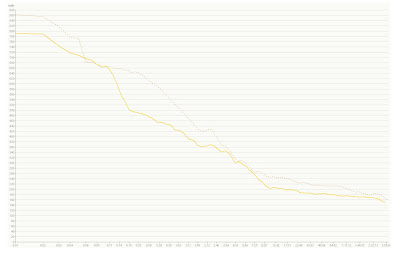 That will certainly be a weekend to remember, and when I get old and start to loose my memory I can just come back here for a quick reminder :)