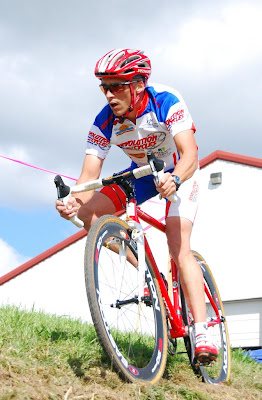 Trip to Kansas City for the first ever Manions Cross. I headed West early and while driving thoughts of a two races started to enter my head. I would get there by 11 in time to to race the Noon Masters race (40+) then again at 2 for the Cat 2/3 race. Why not?

The course was on the side of a hill which made for a fun and interesting layout. Half of it down hill, felt like a ski slop, the bottom flat leading to the base where we climbed back up. I liked the course, the down hill gave you enough time to recover before the climbing started again. Creative for sure.

Got on the front row with some familiar faces, 30+ guys go off then 1 min later they let us go followed by 50 and 60+ guys a min later. The start was up hill to the barn, I had a good start and was first to the barn that led to the beginning of the down hill. I stayed conservative especially after I heard Dan Miller yell at me to race smart. Did not want to go guns a blazin only to fall apart near the end.

On lap two Stephen Songer and Ethan Froese come around and take over. Stephen gets a 10 second gap as Ethan and I stay together. The next lap we begin to bring back Stephen and pass him just before the flat straight away at the bottom of the hill. Ethan gives me a nice pull along here setting me up for the climb back up. At that point I lose both of them and sit alone in first.

I spent the remaining laps growing the gap, catching 30+ guys then cross the line in 1st. Sweet.

The 2pm race was a Mens Open and Men Cat 2/3 race. I opted for the Men 2/3 race looking for a chance to score some cash and upgrade points.

Not the best start of all time for me, did not get clipped in due to unintentional bump that pushed me off balance at the start. Had to re-group and I think was dead last as we entered the barn. Ben Stover off the front along with Cale, Dan Miller and many others.

I kept a calm steady pace and began to move my way up. Not sure when it was but I caught Dan and asked him what place he was, he said 2nd. Sweet! He and I moved our way up to Ben Stover who was leading and formed a 3 man lead group. Soon after as we were climbing the hill Dans pedal gave out on him and he was out, that left Ben and I racing for the win.

Ben had better legs than I up the hill and began to slowing break away. With two to go I could see Cale closing the gap from behind. He caught me on the last lap about halfway down the hill. I grabbed his wheel thinking we would let the hill climb decide 2nd place. We hit the hill and Cale had nothing left, said he was toast and I rode away for 2nd.

Action packed Sunday for sure and well worth the trip. Thanks to all the guys and gals that put on the race, well done!

Next up, Boss Cross Saturday and Sunday. Looking forward to this one, I hear great things about the crew that puts this race on, first time I've had the chance to race it.
Posted by Jeff Yielding at 11:28 AM