Almost as anticipated as cross is the Thursday Night Dirt Crits. Ralph and his crew put on a great event and were rewarded with a huge turnout last night for the first of a 5 race series followed by a Sunday final in Aug.. The numbers visually looked strong, my guess 150 total riders.

Shaun and Christo, the two South African transplants, from Hermann loaded up with me for an early arrival. Good parking and pre-riding is always in order.

Nice sized field for the A race, 36!
Race gets started with an all out sprint to the first turn only a 100 yards away. I’m in a good spot as we approach and try to power slide around the corner, slid out and I go down. I get heckled with “Dang it Yielding, way to go” from many, get back on the bike and move on. This genius move cost me a chance to be with the lead group as Chris, Dan, John M, John R and Bob motor on. This is such a fast race it’s hard if not impossible to gain much ground when you make a mistake.

Soon I find myself with Tom A, Dan Mc and Scott O racing for 6th. We had a nice pace going and were flying around corners. Not sure how long into the race it was but I cut a corner really short and caught a branch. This threw me forward and down to the ground fast! I was on the tail end of our 4 man group so thankfully it did not impact them any. I got up quick, checked things over and off I went but those guys were gone.

I was in no man’s land for awhile then Drew came into view from the rear, he caught and kept going. Drew is riding well for sure and we’ve had our matches this year, I think we are now even 2 -2. Next chaser to catch me was Greg, I held his wheel for a lap then began to poop out so away he goes too. 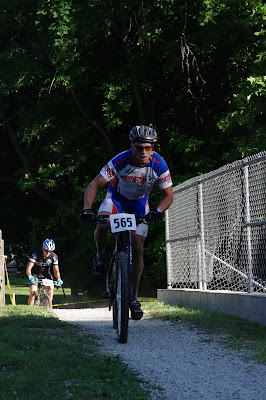 Stu and Doug were next to chase closing the gap, a hard effort on the last lap kept them at bay to cross the line 11th.

That was one fun race from start to finish.

These number don’t mean that much right now, the fun part will be to compare them to each other over the next 5 weeks.