Today's bubba race, the last in the series before State next weekend, had land mines all over it. The awesome course designers were at it again working to create havoc on racers.

Land mine #1 was the slippery root on the back side of the course, countless went down there.
Land mine #2 was the camouflaged root that stuck out of the ground on the back section just before the paved down hill.
Land mine #3 was the 180 at the bottom of the down hill just after land mine #2

It would take laser like focus to make it around this one 8 plus times on two wheels. 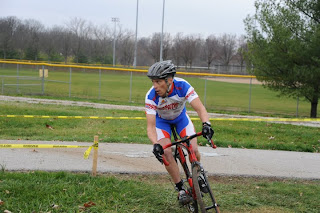 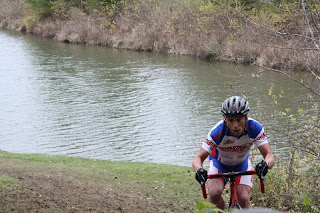 21 showed up to race with all top ten bubba cup racers there except Josh who was in Iowa City playing in the mud. With a strong field like this it was any ones game. Buddy said go and we were off.
I had a bad start trying to clip in, did not mater as things settled in quick.
After the first lap it was Jay, Dave B, Jon, Nate, Dan, Martin, Alex and Dr Mark forming the lead group. I was chasing and soon joined them.
I think it was lap two or three that took out several from this group. Dan hit land mine #1, slippery root, had to un clip loosing some time, I think Jay had the same issue. Land mine #2 , camouflage root, takes Alex out completely, Dave B goes down but gets back up but not after loosing lots of time.
So now it's Nate, Jon, Martin, Dr Mark and I leading. Nate and Jon get a gap leaving Martin, Dr Mark and I to chase. Martin and I manage to drop Dr Mark and work to hold position.
Martin and I were going along well but Dr Mark got some legs and caught back on. I was in a bad spot for the race at this time and lost his wheel as he took off taking Martin with him.
As we enter the back side again with 4 laps to go, Martin gets blown away by land mine #3, the 180 at the bottom of the hill. He went down hard taking him out of the race.
This puts me in 4th with no hope of catching Nate, Jon or Dr Mark. I look back and see Jay and Dave B not far back. Jay catches and passes with two to go and Dave getting closer and closer inch by inch.
With one to go I give it all I have to hold Dave away. I did so until the barriers, he passes , I have no answer, legs were toast with nothing left to give. Great efforts by both guys who were grazed by exploding land mines but stayed focused in there own way to make up ground and advance their position.
I ended the day with a very satisfying 6th place and held on to 5th place in the final bubba cup standing.
The fans on the back side of the course were again off the hook, thanks again for all the cheers!
Thanks to all the stake ponders and bubba operations staff this year too, take next weekend off and just enjoy racing.
Next up, MO State
Posted by Jeff Yielding at 9:42 PM