Fourth Bubba race of season was again held under sunny warm skies Sunday. I love this weather, but I hope we don’t pay for it in December like last year. All was nice for most of the season, then the ice storm hit just before the UCI race in KC. But, that was then, this is now.

Seemed like everyone was anxious to get this one started, I got to the start line 10 min before race time and it was already full. So I started in the back and would try my best to work my self up during the race.

Took a couple of laps before I was able to start any real progress forward, after that it I kept a steady pace catching small groups, hung on the back for a few to catch a breather then on to the next group. My motivation stayed high as I began to move from 30th, to 17th, to 15th, to 8th. This is where I started to loose track of my placing.

The last group I caught included a Mesa rider and Sven from the team (See photo). Once I caught them I hung on the back as Sven pushed the pace trying to catch Mike Weiss ahead who was in 3rd. With two laps to go Sven pealed back and I took over at the front. I kept the pace as high as I could working to catch Mike but he was able to match our pace, made some progress but not enough to catch him. Sven and the Mesa guy dropped off with one lap to go allowing me to cruise through in 4th. Thanks Sven for the help!

Dawndi Cam was out and about shooting, will have video up later. 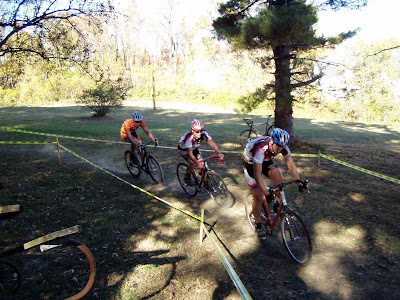 Posted by Jeff Yielding at 6:13 AM