The rule was you had to have a yellow swim cap, I could not find one so I bought a white one and put some of the DogFish art work on the night before along with lots of yellow marker. Most of the yellow came off by the time the swim was over, but it stylish while waiting on the dry beach. 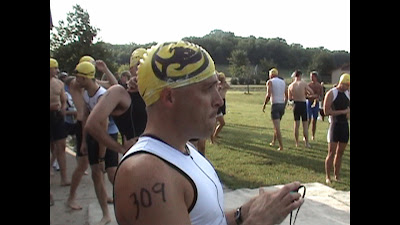 I was in the first of two waves that started the swim. Still a slow swimmer so I moved to the side and just did the best I could. I came out of the water with the last 25% of the group or so. I have a new video, Total Immersion, that was given to me by a friend that should help me get faster soon.
Swim time about 19 min - 1 min faster than was I thought it would be. 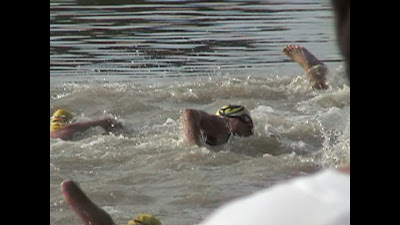 Transition area was right out of the water which was nice, took me 47 seconds to get from the water, change and on the bike. 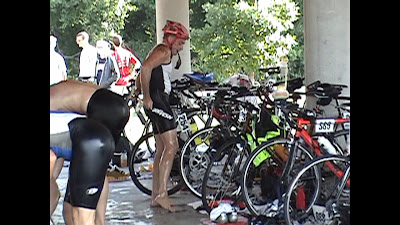 .
The bike route was nice, mix of hills and flats. The bike is where some racing with others started. The two guys you see in the photo above came out of the water with me and both good cyclists. Within the first few miles we were near each other playing cat and mouse games. Finally about half way one dropped leaving just two of us. The guy that was left did pull away from me but I kept him in my sights. With no drafting allowed it was no big deal to let him stay away but keep him within a reasonable distance.
. 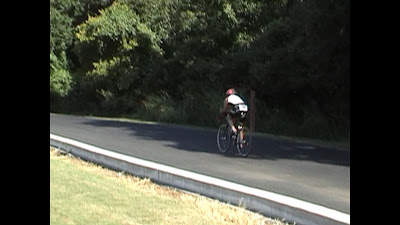 .
With three miles to go I look back and see Jose coming at me with his bright white aero helmet glowing from the sun beating down on it. He was in the 2nd waive so he was having a good race. He zooms past me which gets me thinking I can't let Jose pass me like that.... I start to chase catching and passing him just before we enter the park which leads to the end of the bike leg.
As we get to the park entrance he catches me and I now have caught the guy in front of me. We pass this guy as Jose and I zoom to the transition area together.
Bike too me 59 min
. 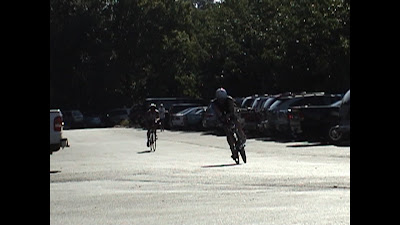 .
Quick change and off on the run. I got a little concerned as I started my run, my legs started to cramp a bit near my quads. I had to take it easy slowing down trying and work this out. During this time the guy I had been racing on the bike leg caught up and passed me. Crap!
The cramping worked its self out after about a half mile and I was able to pick up the pace. 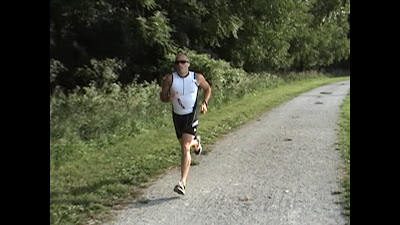 Jose was off and running , I only saw him for a min or so then he was out of sight. 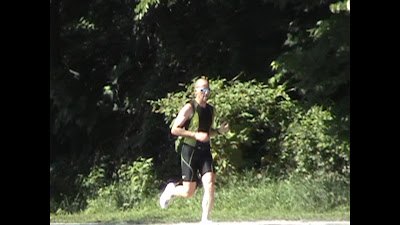 .
Legs feeling good I started to pace my self to catch the guy in front of me by the half way point which I did as we both hit the aid station together heading home for the last 1.5 miles.
I was actually feeling very good so I picked up the pace and dropped him. Close behind him and gaining were to other runners which made for a fun finish.
I knew I had to keep up a good pace to keep them off my heals.
. 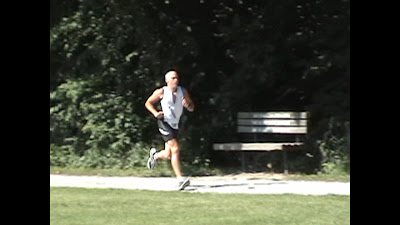 As we neared the finish line me and another guy were gunning it to the end. It ended up being a full out sprint to the end...
. 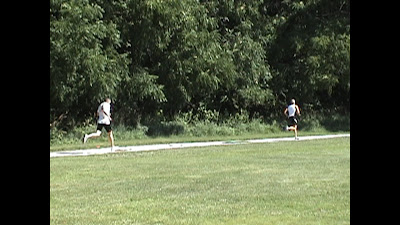 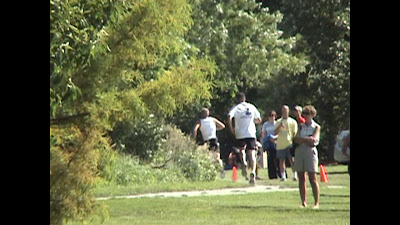 Jose had a good race taking home 2nd in his age group, he missed getting gold by 24 seconds - full results here
.
The Team of Lensing/Montague/Montague (From Hermann) took home gold with a time of 2:02:50
.
Hermann took home a Gold Silver and Bronze!
. 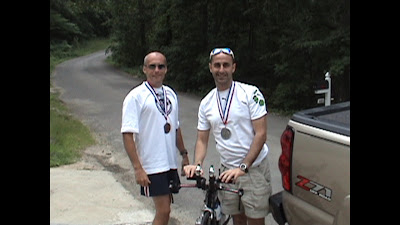 Posted by Jeff Yielding at 7:01 PM