Got started early with a 1.5 hour drive to Clinton Lake from St Joe where we stayed the night after driving in from Hermann on Friday. I was one of the first to arrive because I wanted to get there early to set up being it was my first time at this kind of event and all. 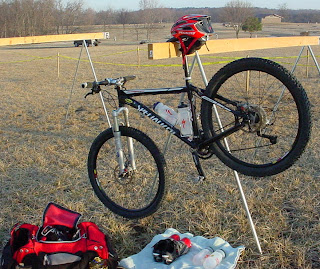 Quickly more and more showed up as things were getting ready to start for the over 100 racers. 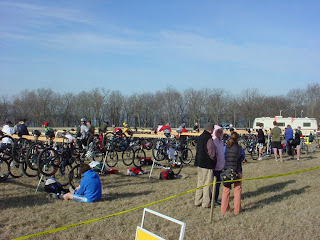 I got my computerize number, slapped it on and I was ready to give this event my best effort. 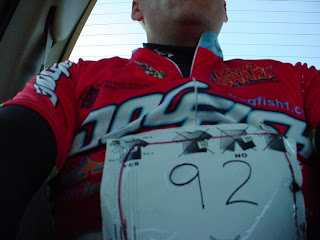 Matt Keeven from the team was there too. Matt is one heck of a racer. He comes from the adventure race side of things giving the road and crit race side of the house some of his time this year. He is starting off as a cat 5 but will be a cat 3 in no time, that is one strong racer. He finished 4th overall and 3rd in the 30 to 39 age group with a time of 1 hour and 28 min. Excellent job Matt! 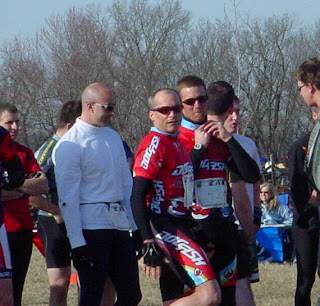 At 9am we're off, my plan to was go hard staying in the front as long as I could then let things play out from there. Plan worked well as I was about 15th or so going into the woods after a quarter mile on paved road before going off road. 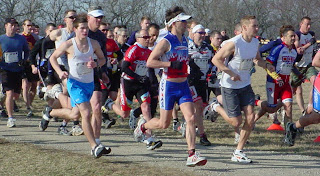 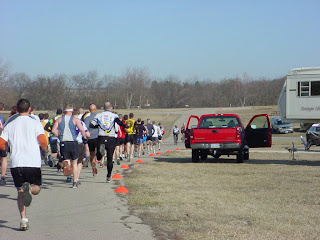 The trail was what you would expect, Rock, roots and moist dirt from rain shower it got the previous day. Things were moving fast as everyone was trying to jockey for position. I lost several spots on the trail run due to taking the down hills so slow. My technique stunk and I paid for it. No big deal, nothing to get excited about I thought, I'll get them back on the bike.

As I came into the transition area I did not realize I had such a large group behind me till I saw this photo. It's like a freight train coming down on me. I finished the run in 19 min, 37 sec with an average HR of 181.

Got into the transition area just fine, changed shoes, quick gel pack and got ready for the bike. 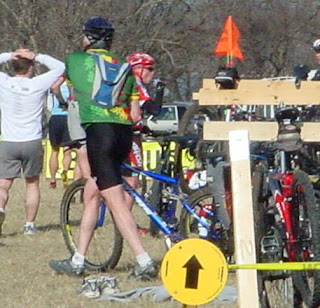 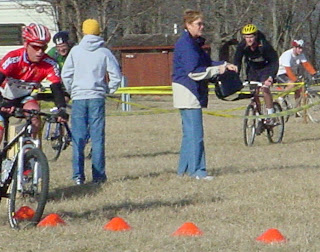 The bike section, two 5 mile laps, was great. Not so crazy technical that it became frustrating but more a good mix of smooth single track, gravel roads, grassy areas, a few rocks and roots and plenty of leg burning hills to climbs. Great trail overall.

I was feeling good about the bike early on as I began to catch and pass riders frequently. This pattern of catch and pass kept up as I finish lap one in 32 min, 12 seconds with an average HR of 174. 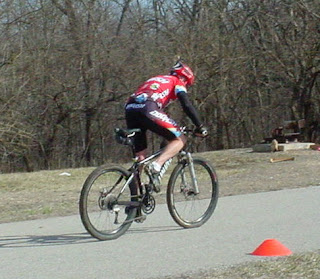 Near the end of the 2nd lap I could see a guy in blue ahead of me. This was great motivation as I picked up the pace a bit to try and overtake him before the transition area. Just past the last climb I caught and passed him on the paved road before transition area with a 2nd lap time of 31 min, 8 seconds with an average HR of 171

Got the bike gear off, running gear on and off I went only I laced up my left shoe too tight and had to re-tie it. This gave the guy in blue time enough to catch up so we ran out together. The last two miles was a game of turtle and rabbit with the guy in blue. As soon as I would get some space on him during the hill climbs (rabbit) he would catch me on the down hills (turtle). This was repeated over and over till finally with about 1/4 a mile to go there were a series of hills that I was able to finish him off with. The only down side of the 2nd run was getting passed by two guys who were just flying, no way could I keep that pace. I finish the 2nd run in 22 min, 1 sec with an average HR of 172.

This was one fun race, I got everything out of it I wanted. Going into the day I was thinking 6th in my age group was possible based on previous results and knowing how fast I could run ect. Getting that one extra spot is a great feeling.

The job that Chris Locke and crew did was just perfect. Now I'm going to sit down with a Fat Tire beer and enjoy the memories from this day.
Posted by Jeff Yielding at 5:48 PM