First I have to say in my opinion the best course layout of the series. Well done to Mike and crew for a challenging technical route.

Today was back at Creve Coeur which was the home of Bubba #1 where I posted a DNF. I've been looking forward to getting back out there to redeem my self.

The race stared out with 19 of us which quickly sorted into several groups that would eventually remain much the same the entire race. I found myself in about 8 place early on. Bridged up to Sven and Matt from the team then off I went chasing down the lead group of 5 guys. 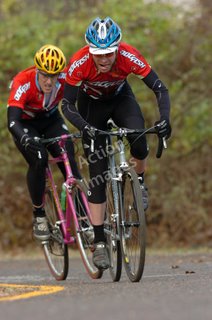 Alone and chasing. Jose from Big Shark in the lead group slipped on one of the technical turns creating some kind of issue with his bike requiring him to dismount a few hundred yards later putting me in 4th place.

I did what I could to catch the lead group, now 3 deep, but never really made any ground or lost much either. I turned my attention to Jose who had made up a ton of ground closing in quick. Lap after lap I could feel his chase. After the dust settled I ended up keeping my position crossing the line in 4th.

4th place was good enough for 3 Bubba points and my best cross finish of the year. 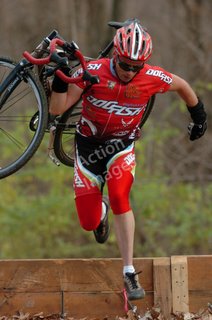 
John made the trip with me. He raced the C race because he needed to get on the road back to Iowa ASAP. He raced hard and did well crossing the line in 8th. 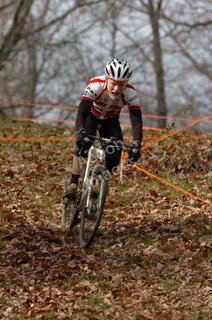 
The next two weeks will be all about getting ready for KC Nationals. No more races till then.
Posted by Jeff Yielding at 8:28 PM