Bubba CX #3 - With BT Epic on Saturday and the US Grand Prix races in KY Sat and Sun it was no surprise the A race was without some of the usual faces. Overall field size was low but the speed was still there.

Course was super bumpy. When I got there and did a pre-lap I was not sure what to think, but thanks to the other races they smoothed it out a little, it ended up being a fun course. Looking forward to a course here soon that is not dominate by long straight sections, this weekend should be more technical. 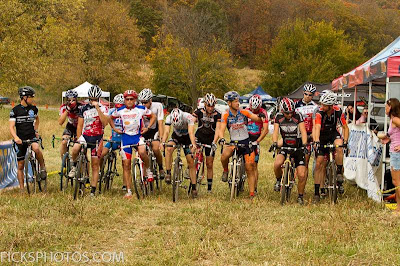 All photos by Dennis Fickinger

Got an OK start, within a lap or two a group of 6 of us formed the lead group; Jay, Ron, Chris, Dan, Dave and I. Quickly the lead group got down to Ron, Dan, Jay and I. I was falling of a bit but as I did Josh was making his way up to us and I hitched a ride back into the group. 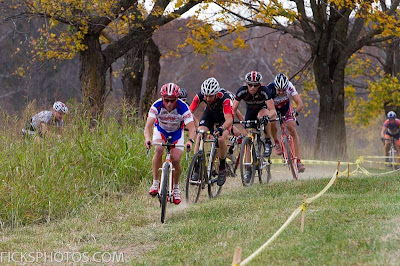 Then things got crazy, we fly down the hill into a right then quick left turn, as we hit the turn Ron and Dan tangle up and both go down. Dan gets up quick but in doing so hooks up with Josh and goes down again into the weeds. Ron I guess had a mechanical due to the crash and we never saw him again. 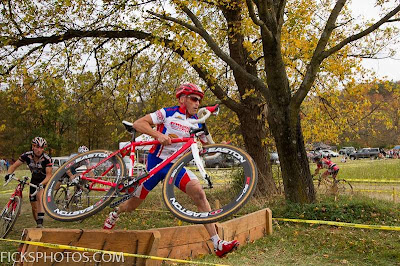 Josh, Dan, Jay and I eventually re-group and away we go but only for a moment as Josh attacks; Dan and Jay go with but I was not able to respond and fell off.

No worries, I'll just settle in and see what happens ahead of me thinking one of them may fall off. With 3 to go that happened, Jay fell off and was within striking distance. I spent 2 laps on the limits working to catch. As we crossed the line with 1 to go I had all but closed the gap on his wheel a minute later. 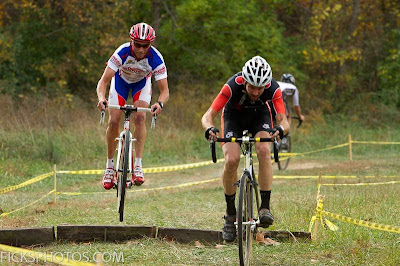 Now it's Jay and I again on the final lap. I sit on his wheel thinking I'll stay here until the hill before the final turn to the finish line and try to take him there. All that worked out except the sprint part up the hill, Jay matched my attack and I could not get by him. Jay held me off to finish 3rd behind Dan who took first, Josh 2nd and I crossed in 4th.


Things shook up in the Bubba Cup points with these results. Dan moved way up from 10th to 3rd and I moved up one spot from 5th to 4th. Jay still holds a slim lead on first place over Josh in 2nd.

Next up a double header weekend, Saturday night race and Sunday day race at Creve Coeur Park, home of this race weekend for the past two years.
Posted by Jeff Yielding at 10:48 AM