Dawndi, Hadley and I packed up and made the trip to Alton on Saturday for the first cross race of the season. What a great feeling to have the season start :)

The "A" race and last race of the day saw a surprise showing of Josh Johnson and legend Ethan Froese from Columbia. Jay Strothman was there and several others to round out a small field of 10 to 12 riders. 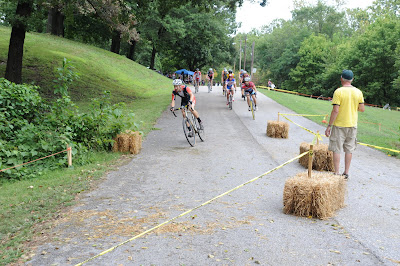 Somewhere in lap 2 I think I passed Jay and was then alone in front for a lap or two.

The rain from the night before made for a soft and marginally muddy day. There was enough mud to get plenty dirty and there was some slippin and sliddin going on. I rode aggressive and took some risks, caused me to slide out and fall a few times but good to test the limits of the bike. I had one bad lap where I went down twice. 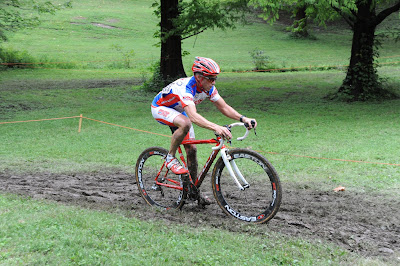 Josh eventually bridged the gap passed me and followed his wheel for the next lap. We hit the long mud section before the finish where I sucked the entire day, this allowed Josh to get a good gap I could not recover from. See ya, he stayed off the front to take the win.

The remaining 4 laps I worked to hold my 2nd place position as Jay was clearly on a mission to catch me. With 1 to go he closed the gap and we were side by side for the last lap. On the back side of the course there was a long brick straight fast section. I made my move there, attacked and got the gap I thought would be enough to hold him off to the finish line.

I made it up clipped in, closed some the gap and the sprint was on! 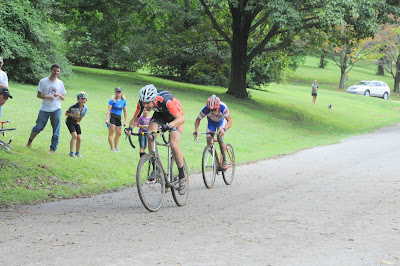 We were both going all out.... I was gaining as we approached the finish line but ran out of runway, Jay takes 2nd I cross in 3rd.

That was a fun race from start to finish!

Thanks to Mark from Alton and his crew for a fun day.

Posted by Jeff Yielding at 4:16 AM