From all the talk the past two weeks you would have thought the MO State MTB Championships were the only thing on this weekend. 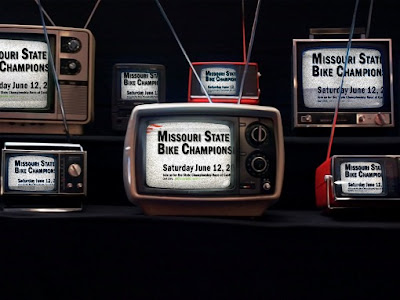 Like me I'm sure everyone else was watching the weather daily if not hourly to see if what seemed liked multiple storm systems that entered the area would destroy any hopes of racing. But, as things worked out storms either missed the race site or fell apart as they got close. End results dry trail and over 100 happy racers.

22 Cat 1 racers and I lined up yesterday in Castelwood on an extremely hot and humid day to see who would be crowned State Champion. Goal for the day was a medal.
The day reminded me of last Aug when I raced Spanish Lake in similar weather conditions. That day I went off the line hard for a full lap and payed the price with a total melt down from the heat having to pull out after the first lap. Today the strategy was keep it steady and be sure to eat and drink. Slow is fast.
The start was up a massive hill which produced a near record 1 min peak wattage number. What a fun way to start :)
5 guys contested for the 40+ race jersey, Brian Duff who beat me last weekend at Warsaw, Andy Lucas, Rich Rudolph and the infamous Tim Kakouris a veteran of CW. I think they all hit the top of the climb before I did except maybe for Rich.
During the 2nd climb I caught and passed Andy and Brian only to be passed by Andy later as we finished the 1st lap. The 1st lap claimed many victims from the heat, TK and Rich were among them.
As we started the 2nd lap I closed the gap on Andy and took the lead on the fist hill pulling away never to see Andy again.
As I finished lap 2 I got a placing update and was told I was in 2nd place (40+), I assumed it was TK out in front but later in lap 3 was told he pulled out. So now I have the virtual jersey and it was up to me to keep things smooth, not crash and avoid a flat.
Things worked out as I passed many riders in the last lap to cross the line 11th overall and 1st in my category. Slow was indeed fast on this day.
Yesterday I was not the fasted guy out there and John Mathews who is 40+ and by far more skilled on the MTB than I gave me a gift by racing a cat down; but I had a good race and happy to bring home my 2nd state jersey.
Full Results
Photos to come Dennis Fickinger will have some posted soon