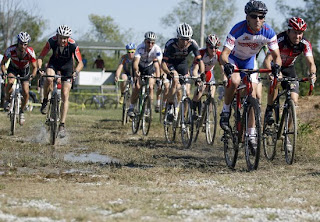 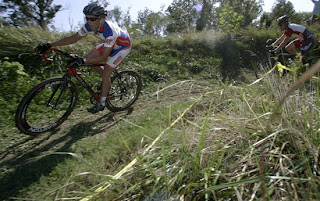 Long drive for sure but I'm itching to race without having to pound stakes, move fence, haul stuff from one place to another and generally not get enough rest before race day. So I did not mind the 3 hour trip to Carbondale to race. Other than only being able to find country music on the radio the drive was nice.

Many of the usual suspects lined up for the Men 123 race: Nagy, Dr. Mark, Matt J, Drew, Stroot, Dennis, "I just got back from Cross Vegas" Jay, "Bearcat Champ" Alex, Martin, Wild Trak crew, Casey, and a few others to make up a group of 13 or so.

I lucked out with a front row spot which was not wasted as I got a great clip in resulting in 2nd wheel into the first turn behind Dr. Mark. Somewhere in the 2nd lap Nagy and Alex come around pushing me into 4th with Jay close behind.

It stayed this way for a few more laps. By this time positions and gaps began to establish, riders looking to move up a spot or push hard to overcome that guy in front of them, or so gassed they hopped they'd be able to hold on for the entire race.

For me, my place was in between Dr. Mark and Jay. Dr. Mark had fallen off the lead group of Nagy and Alex making him my guy to catch. I also had to keep an eye on Jay just behind me, I was sandwiched in. Dr. Mark was matching any attempt I made to gain ground, however these gap busting attempts did help improve my lead over Jay little by little.

I would guess it was about the half way point when I was in the nasty BMX section, took a left hand turn and hit a rut wrong pushing my front tire into the ground hard with a twist sending me over the top and to the ground. No big deal, I'll get up and continue, wrong - rolled the tire.

To be honest the air had been let out of my motivation balloon after this. I did make an attempt to catch who I could but it was short lived and I was reduced to a tempo ride to finish things out. Ended up 9th on the day.

Despite the unfortunate tire roll I was happy with the day having a good race effort overall.

Before I left they gave out some very cool beer mugs, I like beer mugs! Thanks guys!

Next up is a rest week, good thing, I have some much needed yard work to catch up on. Then in two weeks Chris Cross in KC.
Posted by Jeff Yielding at 9:39 PM