Route 66 Duathlon is a small race out of Rolla that I highly recommend to anyone. It's a low key well run event that Dawndi and I have done twice now, having a great time both times.

Dawndi was happy with her goodie bag. 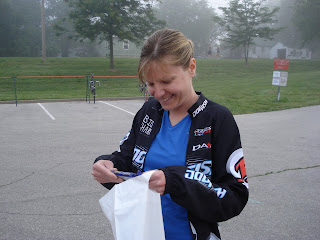 Dawndi hit up the 5K run with me bringing up the rear for the 19 mile TT. Pulled out the skin suite for this one. 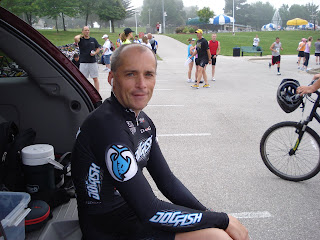 Things got started with the run, mass start. 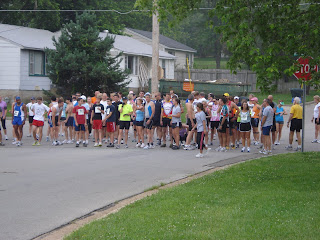 Dawndi has been training well, looking to better her time from last year of 25:58. Having the advantage of racing last year she knew what the track was like and said to me before she took off her legs felt light.

Last years team winner Eric and Blake were there, seeing them we knew game was on.. Blake is a super fast runner throwing down 4.5 min miles. Today was no exception, he came across the line first for the run leg at 18:18.

Dawndi came sprinting across the line 7 min later for a new best time of 25:15. Nearly 45 seconds better than last year, major improvement! Dawndi set me up well to chase down Eric and hopefully take home 1st. 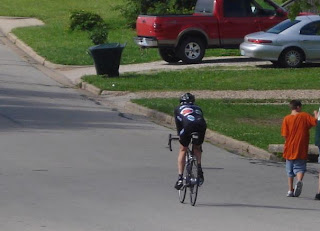 I had the power tap loaded which allowed me to set some specific goals for this race. Stay just under 250 watts for the first 5 min, then ramp things up a bit trying to keep things at 300 or so. On this hills push harder then take it easy on the downhills. Finally, stay seated the entire time.

At the turn around in St. James I was able to get a time check as I saw Eric coming my way. We were now 3.5 min down. After seeing the time check I knew it was going to be close.

With a few miles to go I did get a glimpse of Eric allowing me to get another time check that showed I had closed the gap even more to only 1.5 min between us. Unfortually I was running out of restate, catching him was going to tough at best.

Eric put down a great effort to hold me off with a final gap of 45 seconds taking home first with Dawndi I coming in 2nd in the team competition and 2nd overall. There was one guy who was infront of Eric and I but he cut the course and was DQ'd. 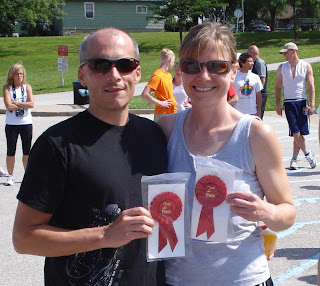 We both improved our times over last year under near identical conditions. I improved my average MPH from 22.8 last year to 23.7. Average watts ended up being 262. The pacing I think made a huge difference, normally I take off hard and suffer near the end. Today I was well within my limits keeping a steady effort all day.

Racing contineus Sunday with the State RR in St Gen.
Posted by Jeff Yielding at 9:54 AM