Great weather made for a heavily attended Bubba Cross race today, 3rd in the series. The C race had 59, B race 44, not sure about the A race. Not only were the racers out, but many were out and about there to watch the action.
Many of which were Halloween crazy fans/racers. Chris from Mesa and his crew were giving each rider their crazy love as they passed by. Team Red Wheel had a rowdy crew out there too. 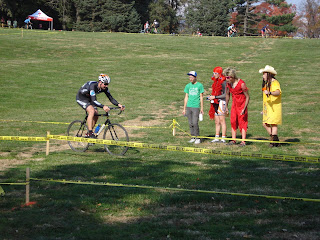 Course was well laid out, nice technical sections, good up hill climbs and a barrier section. Seems like a lot of thought to course design is being paid to the series. Kudos to Anthony, Matt, Johnny, and others building these courses.

Start of the B Race

After a good start Matt from Mesa took the lead, I grabbed his wheel with Alex from The Hub behind me in 3rd. This would be the race at the front for the 1st few laps. 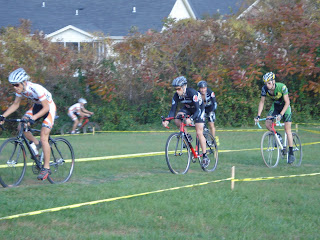 Eventually Matt began to pull away leaving Alex and I to chase. We did attempt an organized chase which payed off as we were able to bring Matt back a few times but he knew where we were. When we got with in a certain distance he would pick up his pace keeping us comfortably behind.
Awesome barrier hill climb section. Great area for spectators and you can see a ton of action


Alex and I eventually conceded that Matt would be the winner and moved our attention to each other. We had a great battle all the way to the end which included 3 prems that a fan put up as we passed their group each time. Each worth a buck, I took 2 and Alex 1. We were abel to grab our winnings as we passed by. 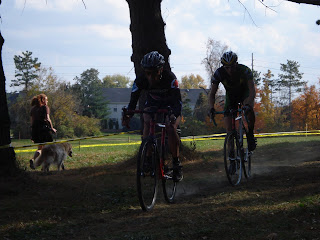 With one lap to go I was leading us out. As we passed the pit I noticed Matt was there working on what looked to be a flat. Alex and I are now racing for 1st. Just before the barrier section Alex comes around and takes the lead. We hit the barriers and both decide to run the entire section coming out clean.

With Alex still in the drivers seat there was only one spot left to pass as we moved up a pavement section before the last few turns into the finish line. Alex kept his position taking the sprint for the win. Nice Job!

Sprinting to the line

With today's 2nd place that gives me 4 more upgrade points for a total of 11. Sent in my upgrade request for CX2 tonight. Next week and beyond I'll be racing in the A races.

Big thanks to Dawndi-Cam for coming out today taking these photos and videos.

Posted by Jeff Yielding at 6:59 PM