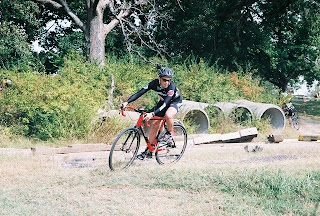 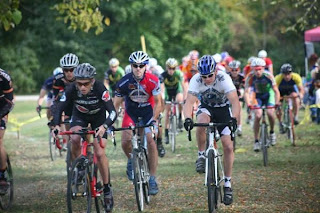 Photo by Scott
From the looks of things yesterday, cross racing is growing. Looked to be 52 in the C/women/jr's race, 36 in the B race and possibly 25 in the A race. Last year I don't think the total racer count ever broke 100.

I lined up in the B race with a front row spot along with Denny from the team and several Mesa guys. Denny, 3 Mesa guys and I set the pace soon began to pull away.

Eventually Denny and two Mesa guys pulled clear, 3rd Mesa guy and I now trailing behind just a bit. This played out for several laps as the gap slowing grew.

With about 5 to go the Mesa guy I was with pulled away putting me in 5th. Soon after a Mack and two other riders caught and passed me pushing me back to 8th. Close behind was last years team mate Sven.

With about 3 to go Sven caught me and we played it out to the end with him taking the sprint. Ended the day 9th. Denny took home 3rd, nice job!

No Buuba points today, need top 6 to get any of those.

All in all a good day and a much better start to the Bubba seriers then last yere where I took home 19th.

Colllar bone held up well and feels good after a nights sleep.

Here is my motion based data
Posted by Jeff Yielding at 5:14 AM