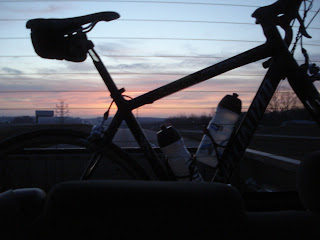 The Bradlyville area reminded me of Hermann as I got of Hwy 44 onto the back roads of T, O and others. Rolling hills with great views into several valleys filled with farms and farm animals.

Small field sizes compared to last weekends Hillsboro race. 26 in the cat 3 field and I’m sure the other fields were not much more or less than ours. Dogfish had a good team of 3’s, Denny, Rich, Matt, Casey and I. Things got started on time and off we went.

Last weekend Shawn O’Neal took off right from the gun, this week was no different. We got started and away he goes looking for a wire to wire win. The rest of us kept thinking he would never be able to hold that for 57 miles. Well he almost did. Another rider a few miles into the race bridged up to Shawn and they both stay away for the entire race. At the 30 mile mark they had a 5min gap.

So the rest of us stayed together with a few attacks here and there, nothing to crazy. Near the big climb 30 miles out things slowed way down, as the group was getting ready for the big climb.

As the climb reached the steepest point near the top the field shattered. 8 guys reached the top together including Casey from the team, back from them a short distance 3 riders, including Rich and Denny, and then just back from them, 4 riders, which is where I was. My group worked well over the next few miles to catch the group of Rich and Denny, eventually we had a group of about 10 or more as others bridged up too. A chase for the 8 in front would occur but not enough riders would help pull them back and eventually they were gone for good, plus Casey was up there and he would not have liked it if the team worked to pull them back.

Over the next 10 miles our group of 15 would get smaller as we rode over small rollers and a few other hills; Rich, Denny and I remained in tack. As we approached the last hill I think there were 8 of us left. At the top of the last hill a guy from Mesa attacked, I went with him but he did get small gap and began to ride away. We eventually brought him back and things settled down was we got ready for the filed sprint just a few miles away.

We took the final turn approaching the finish line. At this point I was in the front and had to make the first move, not being able to see a sprint start I would have certainly been caught off guard and fall back. So I started the sprint giving it all I had, things looked good as the finish line approached, then one rider slowly came into my peripheral vision passing me, then another but I was able to hold on from there crossing the line 3rd in our field sprint and 13th overall. Denny was 15th and Rich came in 17th with Matt coming in later, not sure where he placed. Casey took the top prize on the team with 6th overall, nice job Casey and to the rest of the team, great to see so many Dogfish jerseys in the race!

Overall I’m very pleased with the day, felt strong all day, stayed in the front for most of the race, felt like I worked hard and came away with what I need to focus on for the State Road race May 18th. 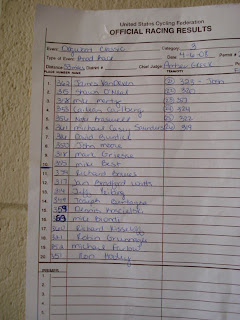 Posted by Jeff Yielding at 9:31 PM