Not sure how many started the race today, my guess it was 30 in the B's and more than that in the C race with what seemed like a handful in the A race.

After some announcements, which included the location for the State Championship now being held in Hermann December 9th we got things started.

I had a good starting spot near the front and started off ok as we headed out for what was to be 11 laps. Things broke up quick with a small pack of 4 leading the way with another pack of 4 close behind. Then there I was, in no mans land, looking to catch on to the 2nd group. After a few laps I was able to bridge up to the 2nd group and hold my position with them for most of the race.

The main group continued to separate its self from the field quickly becoming a distant thought as they would never be caught. I was doing my best to stay with 2nd group, which I was able to do for all but the last two laps. With two laps to go I fell off watching what was now a group of 5 forge ahead thinking to myself that 10th place is not a bad place to be for the 1st race of the year.

With on lap to go, nearly approaching the finish line I hear the dreaded psst sound. With no one near it had to be me, I looked down to see my front tire loose all its air. I tried to ride it, but rolled the tire off the rim, the tube got caught up in the wheel then tore into several pieces. The rule is you can't cut the course so I was left with running the the last part of the last lap. 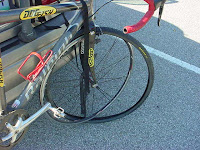 Several past by as I ran out the last few 100 yards to the finish, went from 10th to 19th. I think I'll order some tire sealant tubes on Monday.

All in all I had a good race, average HR was 181 for over 50 minutes and felt great after the race.

I did capture some video of the C and A race that I'll post in a few days.
Posted by Jeff Yielding at 8:34 PM