Day two was near the heart of downtown. Was a bit strange at first as we drove in seeing a lot of homeless people sleeping in the streets. However after all the cycling folks began to get set up, things cleared out. The area we were in is part of a new revitalization project that includes Washington St and a ton of flat apartments. Give this place a couple years and it will be a lot different. I'm looking forward to coming back again.

The race started out like the day before with about 60 of us. The course was a very different, longer including some elevation to it. I kept the same strategy as the day before, stay up front, stay out of trouble, don't let anyone get away and get into to a good spot for the final sprint. 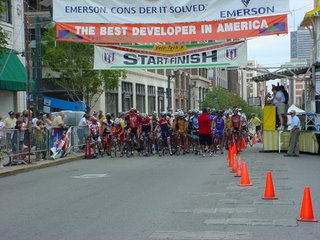 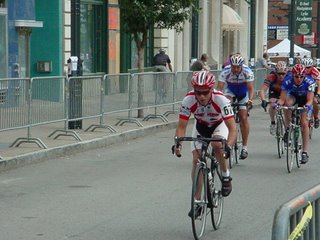 Check out the buildings, sweet place for a race. 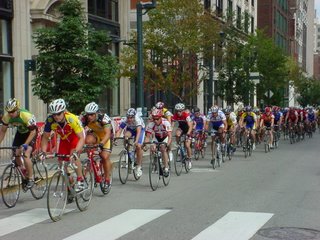 Just past the start finish line. 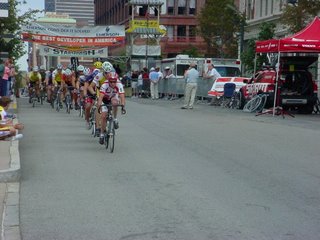 There were two preemies in this race. I had in mind that I would go for both. Ding ding - up for grabs for preemie #1 was gear from Cannondale. Those that wanted to contend took to the front. One guy in blue takes off as if he was going to ride the whole lap solo. He got a small gap that I was not worried about. On the back side of the course is a slight up hill into the wind, takes alot to hold your speed in this section and not poop out. Another guy gets in front of me and tuck in behind. Around the final turn we go, blue guy up front and me catching a ride up the hill. About a quarter of the way up I go to catch the guy in blue, he was spent and I caught him just before the line. Took home a nice Cannondale gym bag for that one.

Preemie #2 was for $25 in cash. Right as they called the preemie a guy goes hard off the front. I catch his wheel all around the course till the last turn. Then swoosh, this guys goes flying by as we climb up the hill to the start finish. I tried to catch his wheel but he just had to much on me. I worked like crazy to catch and crossed the line just behind him. 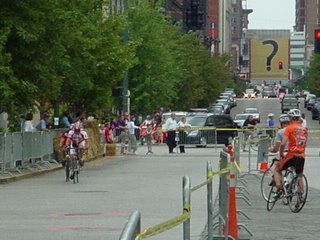 After the 1st preemie I had created a large gap that in retrospect I wish I would have just keep going and tried to capitalize on the gap I had created. I was stuck in the middle of thinking, do I try and go risk burning up out before the end or do I stay with the pack, recover as needed and wait till the last lap. I chose the 2nd option.

Last lap action started with a few guys leading the way. After the 3rd turn a guy in a Trek jersey took to the front pulling the field up the hill. I put my self right on his wheel. Going into the 3rd and 4th turn it was still Teck guy and myself one two. As we took the final turn Trek guy pooped out. My mistake was waiting those few seconds before I ditched his wheel and just took off. Three guys go flying by and I was now in defense mode trying to catch their wheel. We all hauled up the hill all wanting the win. I could not catch the three in front of me so now it was time to make sure no one from behind caught me. I gave it all I had holding my position crossing the line by a few inches in front of 5th place to take home 4th. 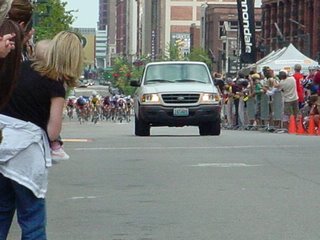 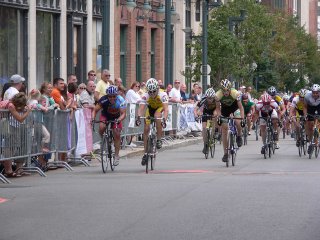 What a great time we had. It was also good to see some Iowa faces there, Amand, Steve and Scott to name a few. Those of you from Iowa you have to make this weekend part of your race schedule, it is a blast.


No more Gateway cup races for me this weekend. Staying near home today, will working and ride trail all day. I have two MTB races in September then cross season starts in October.
Posted by Jeff Yielding at 7:15 AM