I have to tell you now that this race is over, Greensfelder was a mental challenge for me. I'm by no means a daredevil when it comes to MTB racing and you need a little of this on these trail. For me Greensfelder makes up all that exposes my weaknesses; lots of rocks, fast twisty down hills and the potential to endo and crash more then I would like. I did what I could to get ready with two pre-rides but that may have only fed fuel to the fire of fear, I was anxious before this one.

My strategy was to let things play out as they would during the 1st few min of the race. If I was to go hard to get the hole shot in the top 5 then I knew I would slow up the guy behind me on the first down hill. So I took a conservative approach working to keep a steady pace hoping riders who went off too hard would come back to me. So with that said I think I was in about 12 place out of 21 going into first section of down hill single track.

Like I said the strategy was to keep things steady and that worked well. I did not try to bomb the down hills only to knock my self out with an injury neither did I work like crazy on the climbs only to blow up. I settled in and ended up in a good race with about 4 or 5 guys trading spots several times. On the last lap two guys passed me just as we started the lap with another just behind me working to catch making me feel the pressure to keep things moving.


At the mid point of the lap the guy behind me was very close so I pushed up the pace a bit and eventually dropped him. This pressure helped me get closer to the guys in front of me. One of them hit a rock and bent his big chain ring rendering his bike useless. He finished but could not pedal his bike. On the final climb I saw the 2nd guy who had passed me up the hill a bit with in striking distance so I pushed things as hard as I could. I eventually caught and passed him to take 10th place for the day. My goal was top ten so I just made it. 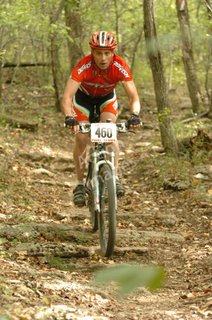 
So there you have it, felt good about the race and felt even better about how I improved my bike handling skills lap after lap. I actually felt in control during my last series of downhills. I worked on taking better lines and staying further back on the bike. I tend to creep forward sometimes.

Dawndi-Cam was busy today so no pics from her. She was attending to Hadley who was at her first race of many. 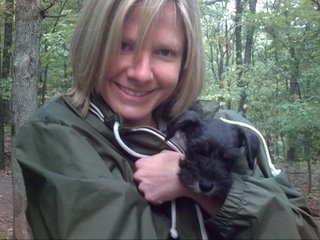 Bikes can now ride in style in the new truck 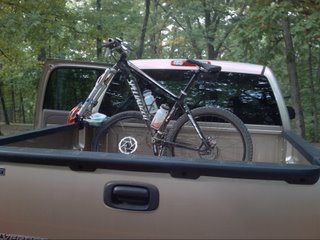 Posted by Jeff Yielding at 6:16 PM